Kopa is the son of Simba and Nala and prince of the Pride Lands in a series of books called The Lion King: Six New Adventures.

According to the illustrations, he looked almost exactly like Simba as a cub, except he had slightly darker golden-colored fur and a brownish-red tuft of hair on his head, a red-brown eye color, as well as a more squared muzzle than Simba. He is described as loving to hear stories, but is also curious and playful, like his father was when he was a cub.

In the book series, much of the time Kopa is listening to a story from various people like Zazu or Rafiki, but he appeared most prominently in Vulture Shock. He also had a few minor roles in some of the other books in the set of six.

During Vulture Shock, Kopa wanted to find his family tree, which he thought was an actual tree with fruit and leaves. After being embarrassed by Mega, Leo, and the other lions, the cub asks Simba to take him to it. His father was too busy, though, dealing with a greedy hippo. So Kopa decided he would find his family tree by himself. While trying to catch a Lizard to eat it, Kopa ended up wandering too far off and ended up in a dry, barren land; lost and afraid that he would never find his way back to Pride Rock, he curled up and fell asleep. In the morning he was found by two vultures, and realizing that the cub was the Lion King's son, the vultures knew Simba would trade anything for him, including a feast so large they would never go hungry again. They kept him prisoner high up in a tree so he couldn't escape, where Kopa was later found by the Buzzard Boyz, a group of rapping vultures. They befriended Kopa after the tiny cub said he liked their singing, and the gang brought Simba and Nala to him. Kopa was then rescued, and his captors were forced to listen to the Buzzard Boyz concert. 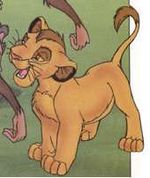 Kopa in How True, Zazu?

In A Tale of Two Brothers, Rafiki tells the back story of Mufasa and Scar to Kopa, and teaches him that we shouldn't be jealous of others.

In How True, Zazu?, Zazu tells Kopa about his life when he was young and how he became the King's majordomo.