Difference between revisions of "Nala"

A rambunctious lioness cub ready to go wherever and whenever with her best friend Simba. As Nala grows up, her spunky cuteness ripens into sleek, tawny beauty, her childlike bravado becomes true courage and her friendship with Simba deepens into love.

Nala is a pale tan or creamy colored lioness with blue-green eyes, as both a cub and adult. In Simba's Pride Nala's appearance changes slightly with her fur being a lighter color and her eyes going from a greenish-blue to a bright blue.

In the second film of the series The Lion King II: Simba's Pride, she is known by many to have a larger chin than in the first.

Nala is the daughter of Sarafina. She is the mate of Simba and the mother of Kiara in The Lion King II: Simba's Pride, however in a book series The Six New Adventures, she is mother to Kopa, who however doesn't exist in the movies, as he was denied by the The Lion King film's makers. While the first Lion King movie was in production, a cub named Mheetu was supposed to appear in the film as her younger brother, but his character was dropped during production.

Nala during Can You Feel The Love Tonight?

Simba: "I can't marry her; she's my friend."
Nala: "Yeah. It'd be too weird."
—Simba and Nala, as Zazu speaks of marriage

Nala is first seen asleep with the pride when Simba tries to wake up his father. The next day Nala is being bathed by her mother, Sarafina, after Simba's first shown dialogue with Scar. Simba appears and asks Sarabi to let them go to the waterhole, when Simba was really going to the elephant graveyard. They are allowed to go, but Zazu had to watch over them. Along the way, the cubs plot to distract Zazu by singing a song called I Just Can't Wait to be King. They succeed. The cubs play together and wrestling, resulting in Nala pinning Simba. After they wrestle a second time, they roll down the hill and they discover that they arrived at the elephant graveyard. They are soon chased by Scar's three hyenas, Shenzi, Banzai, and Ed. Suddenly, Mufasa comes to the rescue and saves the cubs from the hyenas. 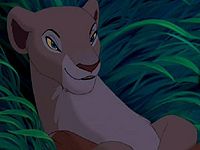 Nala during Can You Feel the Love Tonight

"Nala? Is that really you?"
—Simba, after Nala flips him over

Later on in the movie, Simba and Nala are both young adults. They are reunited when Nala tries to eat Simba's warthog friend Pumbaa. They are both overjoyed to see each other and they discover that their friendship has turned into a relationship for both of them. Soon, Simba refuses to return to go back to the Pride Lands with Nala to defeat Scar, which leads to a quarrel between he and Nala, as she believes he is the true king and their only chance to restore the Pride Lands from Scar's tyranny.

Later, Simba has a change of heart and he, Nala, Timon, and Pumbaa return to the Pride Lands so Simba could defeat Scar for the throne. Upon returning to Pride Rock, Nala along with the other lionesses learn that Scar had killed Mufasa and had framed Simba for it. Simba battles Scar for the throne and Simba succeeds when Scar is thrown from a cliff to a pack of angry hyenas. The Pride Lands go back to normal with Simba and Nala as the new king and queen. They look on proudly as Rafiki presents their newborn cub to the Pride Lands.

Nala now a mature adult, has a slightly smaller role in the sequel to The Lion King. In Simba's Pride, she has visibly aged and her frame is heavier, but larger. She is still young, being a whole generation younger than the villain named Zira. Her personality is different since becoming queen. Nala has been calm, mild-mannered, and motherly in the sequel.

Simba and Nala now have a rebellious daughter named Kiara. Nala's parenting approach contrasts with Simba's need to know that his daughter is safe. She believes that his concerns are groundless and somewhat paranoid.

Nala first appears in the film as Rafiki presents Kiara to the animals. She looks on proudly as the animals admire her. She appears in most of the first scene when she tells Kiara to mind her father. She then has a discussion with Simba after Kiara runs off to play by herself. However, Simba goes against Nala's advice and sends Timon and Pumbaa to look after Kiara. She then appears when she, Timon, Pumbaa, and Simba come to rescue Kiara from Zira in the Outlands. After returning to the Pride Lands Simba sends her and the rest of the pride back to Pride Rock whilst he stays behind to talk to Kiara.

Soon after, Kiara has grown into a adolescent. Nala talks to Kiara before her first hunt and nuzzles her after that. She next appears when Kiara is rescued by Kovu and reminds Simba that he owes Kovu 'Kiara's life' due to royal protocol. She is present that night when Simba has a nightmare about trying to rescue his father during the stampede. She is asleep and remains silent after the nightmare.

As Kiara and Kovu spend time together in the grasslands, that night, Nala finds Simba on a hill, desperately trying to seek advice from the great kings of the past. She consults him, seeing the good in Kovu that Simba can not see past due to Kovu's links to Scar. She is later seen witnessing Simba banishing Kovu where she is shown to not be happy with Simba's decision.

Nala is present in the final battle when she confronts Vitani. Vitani taunts her about Kiara's disappearance. Later Nala gives directions as Simba leaps into the gorge to rescue Kiara, who is stranded above the swollen river. Once the Pride Lands go back to normal, she journeys back to Pride Rock and stands atop the promontory with Simba, Kiara, and Kovu, roaring alongside them.

Nala is the most powerful lioness in the Pride Lands. She was able to fight Vitani, even though Vitani was younger and trained to kill. Before Simba's confrontation with Zira, Nala was able to outmatch Vitani. 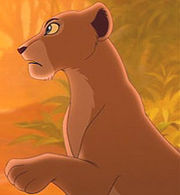 Nala in The Lion King 1½

Timon: "This is a disaster, Pumbaa. A disaster, I tell ya!"
Pumbaa: "You mean because they've finally found each other like two soul-mates joined across the years by the bonds of true love?"
Timon: "Sweet, innocent, little Pumbaa, she's going to put a stake right through the heart of our Hakuna Matata!"
Pumbaa: "Oh! Then I guess we ought to do something."
Timon: "And I know just what it is. Pumbaa, we can't let them feel the love tonight!"
—Timon and Pumbaa, as they witness Simba and Nala falling in love

Nala plays a minor role in The Lion King 1½. She is seen in scenes like during the Can You Feel The Love Tonight sequence and in an extension of the scene where she explains to Timon and Pumbaa about Simba's whereabouts. Although a minor role, Nala was still voiced by Moira Kelly in this film.

Nala and Simba in The Lion Guard: Return of the Roar

Taking place in the middle of the second film, Nala first appears with Simba and Rafiki at Pride Rock overhearing Kion's loud roar. Hearing this, Rafiki (knowing that the roar Kion did was The Roar of the Elders) declares that it is time for Kion to become leader of The Lion Guard. Simba is reluctant for this to happen as Kion is still a cub and needs more time, but Nala encourages him to listen to Rafiki.

Nala later appears when she accompanies Simba and Tiifu to Kiara (who had sent Tiifu to fetch Simba after noticing Janja and his hyena clan going into a gazelle herd). However when they get there, the trio look on in horror as Kiara becomes trapped in a stampede, the hyenas have started in the herd. Luckily, Kion and his Lion Guard are able to save Kiara and drive the hyenas away. After this, Nala and Rafiki show unsurprised pride in Kion with Simba following suit. 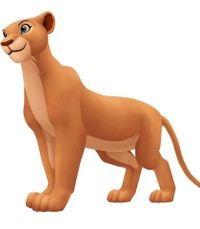 Nala says in the dialoge that she is pregnant in the game, but it is undetermined who she was pregnant with.

In the musical based on the same film, Nala's role is considerably expanded, with the events leading up to Nala leaving the Pride Lands under Scar's tyranny depicted in detail.

Nala first appears in the musical as she is hunting with the other lionesses, replacing the scene from the film in where she was bathed by her mother, Sarafina. Later during the song, I Just Can't Wait to be King, she sings quite a few extra lines that do not appear in the film version of The Lion King.

In the scene, The Madness of King Scar, the lonely, mentally ill Scar decides to take Nala as his mate, despite the fact that she is angrily opposed to the idea. This leads to the song scene, Shadowland, where Nala's character sings the lead about her need to leave the Pride Lands and find help. The other lionesses sing supporting choir and Rafiki sings a blessing. At the end of the song, Nala bids her pride a sad farewell and leaves.

Tony-Award winning actress Heather Headley portrayed her in the original Broadway cast. In the London West End production, she was originally portrayed by Paulette Ivor.

The song Shadowland was based on the song Lea Halalela from Rhythm of the Pride Lands.