Kovu is the son of Zira, the younger brother of Nuka and Vitani, the adopted son of Scar, the deuteragonist of The Lion King II: Simba's Pride and a guest character in its midquel series The Lion Guard. He is also the half-brother of Nuka and Vitani. He was originally intended to be named Nunka and be the son of Scar, but this was changed as this would make him Kiara's second cousin. Instead, he became Scar's adopted son and heir.

Kovu is a brown-colored lion with a dark brown mane and tail-tip and a muscular build. His eyes are emerald green with yellow scleras. As a young adult he has a scar over his left eye that he received from Zira.

"Oh, haven't you met my son, Kovu? He was hand-chosen by Scar to follow in his pawprints, and become King!"
—Zira to Simba

Kovu first appears in the movie when Kiara tumbles into him from falling off a log. Kovu reacts aggressively at first but soon begins to tease Kiara for being "daddy's little girl". As the two wander to a body of water they are attacked by crocodiles. The cubs evade the crocodiles and begin to play, but are interrupted by Zira and Simba. The two confront each other before picking up their cubs and leaving.

Later, Zira yells at Kovu for being friendly towards a Pridelander. Kovu tells his mother that he thought Kiara could become friends with him. Zira berates him at first, but then realizes that gaining Kiara's trust would be a great way to infiltrate Simba's pride.

Zira trains and conditions Kovu until he is a young adult. When she deems him ready, Zira sends Kovu out on his mission to kill Simba. Nuka and Vitani help by starting a fire while Kiara is out on her first hunt. Kovu is able to save Kiara from the fire and gain the trust of the Pridelanders.

Later that night, when the lions fall asleep, Kovu appears in Simba's nightmare. In the nightmare, Mufasa is slipping down into the gorge. Simba tries to help him, but Scar appears on the ledge, mocking and cackling. After Mufasa falls, Scar morphs into Kovu. Kovu then grabs Simba's arms like Scar did to Mufasa, and lets go. While Simba is falling down into the stampede, he wakes up from his nightmare, panting.

The next morning, Kovu prepares to attack Simba while he is drinking from the water hole, but Kiara interrupts him to begin the hunting lesson. The pair soon stumble upon Timon and Pumbaa who are trying to chase some birds away from their favorite feeding site. The two lions roar, scattering the birds. They all chase the birds until angering a crash of rhinoceroses. In escaping from the rhinos, Kovu and Kiara accidentally kiss.

That night, Kovu and Kiara lie under stars and look at star formations. This leads them to offhandedly talking about Kovu's past. Kiara starts to nuzzle him when he expresses his fear of becoming like Scar, but Kovu leaves when he is unable to tell her his true intentions. Rafiki intervenes and takes them to a place called Upendi, which means "love" in Swahili. 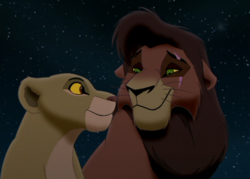 As they venture back to Pride Rock, Kovu has Simba on his own. Now seeing a better life with Kiara in the Pride Lands, he refuses to attack him. Vitani waits for Kovu to attack, and reports back to an angry Zira when he doesn't.

The next morning, Kovu resolves to confess to Kiara his true reasons for coming to the Pride Lands and that he has abandoned the plot. However, before Kovu can do so, Simba takes Kovu out for a walk through the fire-ravaged lands. As they walk, they discuss the true nature of Scar, but they are ambushed by Zira and the Outsiders. Zira congratulates Kovu, but Kovu panics as he realizes he inadvertently completed the plot he abandoned. Kovu attempts to save Simba, but his sister Vitani knocks him into a rock, rendering him unconscious.

Simba is attacked and falls into a gorge where a log dam is holding back the river. Simba climbs the log dam to safety and Kovu has a chance to attack him, but doesn't. Nuka, wanting to impress Zira, climbs the log dam and manages to grab Simba's ankle, but is killed when some logs dislodge and crush him. Zira blames Nuka's death on Kovu and slashes him across the face, giving Kovu a scar resembling Scar's. As Zira demands to her son to admit his responsibility for killing his brother, Kovu's stands up to his mother for the first time and runs back to the Pride Lands, where he is promptly exiled by Simba.

Kiara, distraught, runs away to find Kovu. The two meet in the grasslands and proclaim their love that transcends their pride's rivalry. Kovu wishes to run away with Kiara to start their own pride. Kiara refuses, saying that they must return to try and unite their divided prides. They both run back to the Pride Lands, crossing the log dam that has now been weakened, attempting to stop a fight between the two prides. Kovu and Kiara stop the fight, but Zira leaps at Simba. Kiara knocks her aside and the two tumble into a gorge where Zira refuses to take Kiara's paw and falls into the river and drowns.

The now united prides return to Pride Rock where Kovu and Kiara are married with him becoming her prince consort. With order restored, Simba, Nala, Kiara and Kovu roar out across the kingdom while the spirit of Mufasa praises his son for his wisdom.

Kovu, along with Zira, Nuka, Vitani and the other Outsiders, makes a guest appearance in the episode "Lions of the Outlands", which takes place after Kovu's first meeting with Kiara and before his next meeting with her as a young adult.

He first appears coming across Nuka being pinned down by Kion, who did it after Nuka attacked his hyena friend Jasiri (who's clan had been driven from their waterhole by the Outsiders). After Kovu says Nuka is his brother, Kion questions the two on why they are in the Outlands and not the Pride Lands (due to being unaware of the Outsiders' exile) and learns that they are not welcome in the Pride Lands. After learning that Kion is Simba's son (thus Kiara's brother) and that the King might allow the Outsiders back, Kovu expresses excitement of maybe seeing Kiara again. When Kion is surprised to learn that Kovu knows his sister, Kovu says that it was a while ago, before telling Nuka that they've got to take Kion and Jasiri to see Zira.

Kovu alongside Vitani, Nuka and Jasiri, watches in amazement as Kion uses the Roar of the Elders on a cloud, causing it to rain. When Zira leaves to talk privately with Kion, Kovu remains behind with his siblings and Jasiri. Nuka attempts to attack Jasiri, but is stopped by Kovu, who warns his brother that Zira wanted them to "play nice". Though Jasiri reassures Kovu, Nuka jumps over his younger brother and nearly attacks Jasiri, but to Kovu's relief, Zira returns. Kovu and his siblings watch on as Zira tells Jasiri to leave, claiming that Kion allowed the Outsiders to keep the waterhole. Kovu then goes with his mother and siblings to Kion, who is surrounded by the other Outsiders. Confused, Kovu questions Zira on why they can't be friends with Kion, to which Zira replies that it isn't her decision but Kion's as he chose to side with the hyenas over the lions. She also says that Kion, like Scar, will lose his Roar if he uses on other lions and will still lose if he doesn't use it, thus making him harmless and the Pride Lands defenceless.

However, Jasiri and the rest of the Lion Guard (who had learned about Zira and the Outsiders from Rafiki) come to Kion's aid and fight off the Outsiders, whilst Kovu keeps out of the way. After Kion hears that Scar lost his Roar because he used it for evil rather than against other lions, Kovu distances himself from the other Outsiders just before Kion uses the Roar to blast them to termite mounts. Kion starts to approach Kovu, but he quickly leaves to catch up with his pride.