The Lion King Original Motion Picture Soundtrack is an album that was originally released on May 31, 1994 and re-released on September 30, 2003 as "Special Edition." 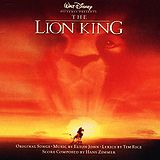 On September 30, 2003, Disney released a Special Edition of the soundtrack with two newly-added tracks:

In addition, on the same day, a vinyl record picture disc of the original soundtrack was released in a limited edition of 4,000.

The Lion King (soundtrack) at Wikipedia