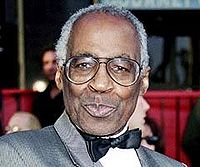 Robert Guillaume is an actor who was portrayed butler Benson DuBois on the series Soap and Benson in a ten year period for the American Broadcasting Company. While most butler in the past were portrayed as being obedient Benson was a wisecracking person who usually got the best of the people who paid him.

Guillaume is most known to the younger generation as Rafiki the Mandrill baboon in The Lion King series. Guillaume is one of only two voice actors who has portrayed their character in EVERY animated medium (the other being Ernie Sabella as Pumbaa.)