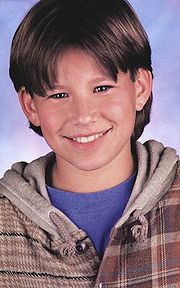 Jonathan Taylor Thomas is an actor best known for playing Mark Taylor on the 1990's sitcom Home Improvement. Know affectionately by his fans as JTT, he was arguably the biggest teen icon of the early 90's. He was born Jonathan Taylor Weiss in the United States on September 8, 1981.

In a behind the scenes special for ABC (American Broadcasting Company) in 1994, it was demonstrated how he performed the part of Simba sliding down the Elephant Graveyard. He would move his finger constantly up and down across his throat mimicking the action of going down a sloped surface.

His archived recordings were also used for Kingdom Hearts II