"I should've been the chosen one. I'm the oldest, I'm the strongest, I'm the smartest..."
—Nuka, lamenting how he was not chosen to be Scar's heir.

Nuka is Zira's oldest son, the older brother of Kovu and Vitani, the secondary antagonist of The Lion King II: Simba's Pride and will be a guest character in it's midquel series The Lion Guard.

Nuka has a thin, lanky build with brown fur, and a very unkempt, scraggly black mane due to the lack of bathing. He is also irritated by termites and scratching himself frequently. He also has blood red eyes, scruffy fur, and tail tuft as well.

Nuka is usually shown to be extremely jealous of his brother, Kovu, for being chosen by Scar as his heir, and thus is shown to give him a hard time, such as intentionally letting him wonder off at the start of the the second movie. He is shown to love his Mother dearly, catching her dinner (shown at the start of the second movie), and before he dies, tell her he was sorry, and that "he tried". Ironically, he was even more like Scar than Kovu: for both Scar and Nuka envied their brother, who would be king. He seems to be somewhat of a pyromaniac, screaming avid "FIRE!" at the Elephant Graveyard, and getting excited when setting the Pride Lands alight.

He constantly tries to please his mother and is very jealous of Kovu's position as Scar's heir. It was Scar's dying wish that Kovu be the next king despite the fact that Nuka is older than Kovu.  Nuka may think highly of himself due to the fact of him calling himself "The oldest, the strongest and the smartest" out of Zira's three children. Nuka carries out what Zira commands along with his sister Vitani.

Nuka first appears as a teenager in the Outlands complaining about Kovu, saying Scar wasn't his father and just took him in. He then notices Vitani tugging a root which he cuts, sending Vitani flying backwards which Nuka laughs at. Vitani then questions Nuka on Kovu's whereabouts as Zira had told him to watch Kovu, but Nuka says he himself should have been the chosen one as he's "the oldest, the strongest and the smartest" and says that he can be a leader if Zira gave him a chance to which Vitani says here's your chance as Zira arrives with Kovu. Nuka tells his mother that he caught field mice for her dinner, but Zira walks right past him and places Kovu down next to Vitani. Zira then scolds Nuka as he was supposed to be watching Kovu to which Kovu comes to his brother's defence and says it was his fault not Nuka's. After Zira compares Kovu to Scar, Nuka scoffs at this but ends up getting growled at by Zira. Nuka next appears during My Lullaby where Zira throws him to ground and stamps on his tail. He along with Vitani look at a sleeping Kovu whom Nuka calls a little termite only to be knocked away by Vitani before the two sing "Kovu What a Guy" though Nuka says it unwillingly.

Adult Nuka in the Elephant Graveyard

Nuka next appears years later as an adult going with Vitani (now a young adult) to the Elephant Graveyard and lit the sticks they brought on fire in order to set fire to the Pridelands during Kiara's hunt in order to trap her as part of Zira's plan for Kovu to get accepted by Kiara's father Simba and kill him and take over as king. He next appears with Zira watching Kiara and Kovu talking. Nuke later helps the other Outsiders when ambushing Simba and Kovu, he is the first Outsider to try and attack Simba at the ambush, but gets pushes aside. As the Lioness' bombard Simba, Nuka takes a run at him and knocks him off a small cliff, then with the Lioness', slides down the cliff in pursuit of Simba. Simba climbs up a steep hill littered with old tree logs and Kovu sees this on the clifftop, and Zira shouts "Get him, Kovu! Get him!", but Kovu turns and runs away. Nuka then jumps in front, climbing up the steep hill and screaming "I'll do it for you, Mother!". As he climbs up, he asks if his mother is watching, then mutters "I'm doing it for you, and I'm doing it for me". 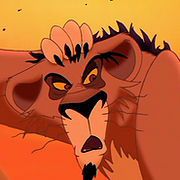 Teenage Nuka in the Outlands

He grabs Simba's ankle, but looses his footing on the log and falls, getting trapped under a large log. Simba clambers up the logs, knocking some onto Nuka, and trapping him inside the logs. Kovu attempts to dig him out, but Zira pushes him away and she removes the remaining logs, and is kind to Nuka the first time in the movie before he dies.

Zira blames Kovu for Nuka's death and slashes Kovu across the face, leaving him with a facial wound identical to Scar's.

Nuka, Right Before He Dies, His Head Cradled In Zira's Paw

The scene where Nuka dies was originally longer, and survives as a pencil test. As Nuka lies crushed underneath the logs, Zira cradles his head gently with a paw. Pleased with her affection towards him, Nuka manages to say "Well, I finally got your attention, didn't I?" and made Zira smile at him. He croaked another "Didn't I..." before he finally dies. YouTube - Nuka Dies (The Version Never Seen). In the final version, Nuka is crushed by the logs, and Kovu rushes to pull the logs off, but he is pushed aside by Zira, who, at seeing her son under the logs, mutters "Nuka..." in a melancholic tone (this is the only time in the movie Zira is shown to be somewhat upset), and all Nuka says is "I'm sorry, Mother... I tried...", Zira then hushes him to sleep, at the same time looking shocked and upset by his death. Vitani stands beside her, muttering "Nuka..." then turning to the other Lions and hanging her head in sadness.

Nuka guest stars in the episode "Lions of the Outlands" (which takes place after the "My Lullaby" scene and before Nuka and Vitani go to the Elephant Graveyard).

The episode reveals that after Simba defeated Scar, Zira said that Kovu had been chosen to succeed Scar as King. But when Simba replied that Scar wasn't the true King, Zira attacked him. After winning the fight, Simba was left with no choice but to banish Zira along with Nuka, Vitani, Kovu and the other followers of Scar to the Outlands.

At some point, the Outsiders takeover a part of the Outlands that has a waterhole and chase out the hyena clan living there. One member of the clan named Jasiri, goes to the Pride Lands to ask her friend Kion (who happens to be Simba's son) for help.