"I'm surrounded by idiots."
—Scar's thoughts about the hyenas.

The Hyenas are enemies of the lions. They were Scar's loyal followers up until the end of the first movie. In spite of being perceived as primary antagonists, they won an undeniable popularity among fans and are appreciated for their humor and foolishness. Most of the hyenas have pointed ears; however, some like Shenzi, Banzai and Ed have rounded ears.

The hyenas first appear in the Elephant Graveyard that Simba and Nala venture into. The hyenas, under Scar's orders, chase the cubs in an attempt to kill them, but are frightened off by Mufasa. Afterwards, they help Scar carry out his plan to kill Mufasa by triggering the wildebeest stampede. Immediately after Scar tells Simba to run away and never return, he commands the hyenas to kill Simba too, but Simba eventually eludes the clumsy hyenas. Years into Scar's reign, they complain about lack of food in the Pride Lands but Scar ignores them. 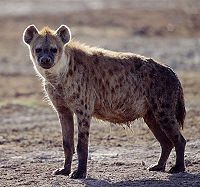 A Hyena, as Portrayed in the The Lion King

When Simba returns to overthrow Scar, the hyenas join the fight, but most are defeated, and Shenzi and Banzai are ruthlessly beaten up by Pumbaa for calling him a "pig". When Shenzi, Banzai, and Ed overhear a helpless Scar telling Simba the hyenas are the enemy, they furiously turn against their master. Together, with the aid of other hyenas, they corner Scar after he is defeated by Simba. Scar tries to straighten this up, knowing that he didn't really mean it, but the hyenas refused to listen and killed him. It's unknown what happened to them after this, although dialogue between Nuka and Vitani in the second movie suggests after Scar's death, the Hyenas left the Elephant Graveyard.

"Yeesh. This place is even creepier since the hyenas ran off."
—-Nuka, talking to Vitani

In the direct-to-video sequel The Lion King II: Simba's Pride, the hyenas are only briefly mentioned by Nuka as he and his sister, Vitani, arrive at the Elephant Graveyard, talking about how the hyenas had run off. This suggests that the pack may have either dispersed or fled completely after Scar's death, although where they went afterwards is unknown.

In the direct-to-video midquel The Lion King 1½, the hyenas have a fairly major role despite being minor characters in the original film. They can even be called the movie's antagonists.

In their first appearance, they attack a meerkat colony when Timon, who is the sentry on duty of the colony, is daydreaming. They fail to catch any meerkats, but this incident drives Timon to leave the colony to find where he truly belongs. The hyenas make an appearance again during the film's climax at Pride Rock. Some anonymous hyenas are seen chasing Timon and Pumbaa into a cave (after the Hula Song), and are driven out by Pumbaa's flatulence. Eventually, Timon and Pumbaa are cornered by the hyenas. Timon proposes to Shenzi as a desperate move to buy time for his mother and Uncle Max as they dig a tunnel, which she turns down abruptly. The hyenas then fall into the tunnel, which transports them to the ground just in time for them to confront Scar.