Difference between revisions of "Tim Rice" 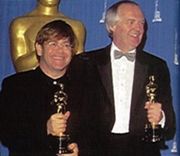 Born in Buckinghamshire, England, Rice entered the world of popular music as the lead singer for a pop group called the Aardvarks from 1961 to 1963, and went on to sing occasionally with other '60s rock groups. His first published song, "That's My Story," appeared in 1965, the same year he met his future songwriting collaborator, Andrew Lloyd Webber.

Following an unproduced first effort entitled "The Likes of Us," the pair went on to create a sensation on musical stages from London's West End to Broadway with their collaborations on Joseph and The Amazing Technicolor Dreamcoat (1968), Jesus Christ Superstar (1970), and Evita (1976). The team also collaborated on a 30-minute comic musical entitled "Cricket," which had its world premiere in the presence of the Royal Family at Windsor Castle in 1986.

Years later, when Aladdin lyricist, Howard Ashman died, Rice was brought in to finish the songs with its composer, Alan Menken. The two wrote "One Jump Ahead", "Prince Ali (Reprise)", and "A Whole New World", which won the Academy Award for Best Original Song.

After the success of Aladdin, Rice signed on to compose the songs for The Lion King. During production of the film, Rice asked for Elton John to collaborate with him on the songs, to which John agreed. The two later went on to win the Golden Globe and Academy Award for Best Original Song for "Can You Feel the Love Tonight". They later wrote compose "The Morning Report", "Chow Down", and "The Madness of King Scar" for The Lion King stage musical.