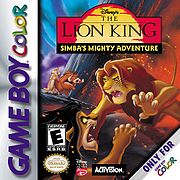 The title was published by Activision in 2000, and was released on Game Boy Color and PlayStation. Unlike the previous The Lion King video game, it adhered more closely to the events in the film and the storyline carried on into The Lion King II: Simba's Pride with Simba having to rescue his daughter Kiara and battle Zira.

This game was the only console-based platform game to involve The Lion King II: Simba's Pride. All other games based on the title were educational or puzzle games and were released on the PC. Like most of the Disney games of the time, it contained film clips, and third-person gameplay.

The game's gameplay varied between the two consoles.