Sarafina is the mother of Nala, mother-in-law of Simba, maternal grandmother of Kiara, Kion and Kopa and a minor character in The Lion King.

Sarafina takes on the appearance of a typical Pridelander; cream fur, apple-green eyes, and colorless paws. Both her upper and lower eye shades are light, the opposite of Scar's, which are dark. She looks distinctly like her daughter Nala and also similar to Sarabi. 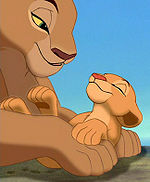 Sarafina and her daughter, Nala

Sarafina is mother of Nala and Mheetu, although Mheetu does not appear in the film. In the book universe, she and a lion named Ni, help rescue Chumvi, Kula and Nala from Hyenas in the book, Nala's Dare. In the movie, Sarafina has but one line: "Hmm...what do you think Sarabi?". She is also known to appear in The Lion King II: Simba's Pride in one scene when Kiara is about to go on her first hunt, where she says to Kiara "My, how you've grown!", however there is little evidence to say that lion is definitely her.

Sarafina first appears in the film asleep inside Pride Rock with Nala in her arms when arrives to wake up his father Mufasa (who promised to show Simba The Pride Lands. She is next seen later that day with Sarabi and giving Nala a bath just before Simba arrives wanting Nala to come with him to a "really cool place" (which is The Elephant Graveyard, but Simba tells Sarabi that it's around The Waterhole). Nala asks Sarafina if she can go with Simba to which Sarafina asks Sarabi what she thinks. Sarabi allows the two cubs to go, as long as Zazu goes with them.

Sarafina is last seen in the film the following night with Nala, Sarabi, Zazu and the rest of the pride mourning the deaths of Mufasa and supposedly Simba after Mufasa's younger brother and Simba's uncle Scar tells them about the stampede (unaware that Scar killed Mufasa and tricked Simba into leaving The Pride Lands so he could be King) before allowing hyenas to live in The Pride Lands. It is possible that Sarafina was amongst the lionesses that took part in The Battle of Pride Rock after Simba returned and defeated Scar and reclaimed his rightful place as King of The Pride Lands.