Mufasa is a large powerful male lion. He is the father of Simba, the mate of Sarabi, and the older brother of Scar. He is said to be the son of Ahadi and Uru in The Lion King: Six New Adventures but it is unofficial. He is wise and caring, often portrayed as the ideal king and wishes to pass those traits down to Simba. 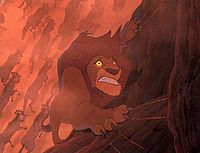 In The Lion King Mufasa is the King of the Pridelands. At the beginning of the film, the presentation of his newborn son, Simba is shown. A short time afterwards, Simba wakes up Mufasa early in the morning, due to a promise Mufasa made to him prior to the events. Mufasa shows Simba the pridelands, and tells him that he too will be king of the pridelands someday, but to stay away from the Elephant Graveyard.

Simba, being a curious cub decides to venture off into the Elephant Graveyard with Nala, after distracting Zazu. But soon Zazu catches up with them, but the Hyena's show up at the same time. They then attempt to roast Zazu in the "birdie boiler". Simba then confronts the Hyena's, but the plan backfires, and they try to attack him. But before they could, Mufasa shows off, and forces them to run away.

Right after, the Hyena's tell Scar they couldn't get rid of Simba. So he devises a plan: to kill Mufasa.

Scar has the hyenas scare a large group of wildebeast, in order to start a stampede. Simba attemps to run away from this invasion, but is very close to meeting his demise as well. He hangs onto a small branch right above the wildebeast, where Zazu then alerts Mufasa of what is happening. Mufasa arives at the situation, and grabs Simba with his mouth. He is attacked in the side by a wildebeast, but is still able to reach the ledge just in time to get Simba safe from harm. Mufasa is then carried off into the stampede, but jumps up, attempting to climb the ledge. When he gets towards the top he pleads for Scar's help. Scar then proceeds to pierce Mufasa's paws with his own claws, and then whispers in his ear, "Long live the king." Scar then throws Mufasa into the stampede. 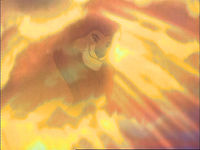 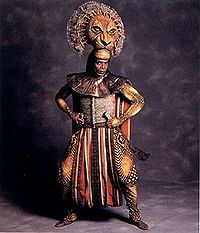