From The Lion King Wiki
Jump to: navigation, search
Lion

Lions and Lionesses (scientific name Panthera leo) are the main characters in the Lion King movies, aside from the third movie, which focuses on Timon and Pumbaa. Lions are known as the "King of the Jungle" and are the second largest "big cat". 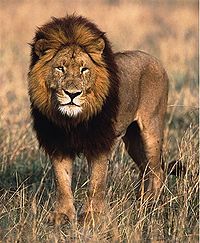 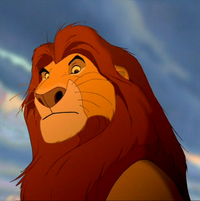 Mufasa, a lion, as portrayed in the The Lion King

Lions are found Africa, and India (although are considered critically endangered in India), in Africa they are considered "vulnerable". Lions used to be found in Western Asia and the Middle East, although they have long since disappeared from those regions. A Lion may live for around 10 to 15 years in the wild, and have been known to live for up to 20 years in captivity. The Lions and Lioness are physically different, the male has a large mane, and a large build, where as the female is a lighter colour and lacks a mane. In Africa, they are mainly found in Grassland or on the Savanna. The are the second largest big cat (with the Tiger being first).

Lions are portrayed in the Lion King

The "evil" characters in the Lion King are portrayed as having darker fur, and the males as having black manes (Scar, Nuka, Kovu), although this is impossible, there has never been a sighting of a lion with a fully black mane, only partly black.

Overall, throughout the movie, the Lions are portrayed as ruling over the other wild animals of Africa.

Lion/Lioness Characters in the Movies

Lion/Lioness Characters in the Books/Comics