Difference between revisions of "Kion"

Kion is the son of Simba and Nala, the younger brother of Kiara, the grandson of Mufasa, Sarabi, Sarafina and Nala's Father, the great-nephew of Scar, the Prince of The Pride Lands and the main protagonist of the television film The Lion Guard: Return of the Roar and it's follow-up series The Lion Guard.

Kion as an infant 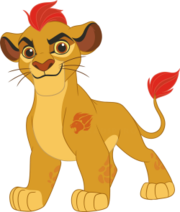 As a infant, Kion had reddish-brown eyes, pale yellow fur with brown spots on his legs and a small tuft of red hair on his head.

As a young cub, Kion remains the same except that he now has bright yellow fur (which is resulted by Simba's dark gold fur mixed with Nala's tawny fur) and his hair tuft has grown more. After becoming leader of The Lion Guard, Kion gains a Mark of the Guard on his left shoulder, which resembles a lion's head.

Kion first appears at the start of the film playing Baobab Ball with his best friend, a honey badger named Bunga and ends up disrupting Simba from teaching Kiara about being Queen. After a short clash with Kiara, Kion is sent by Simba to play with Bunga elsewhere. The two friends continue their game out in The Pride Lands, but the Baobab fruit ends up in The Outlands. Kion is reluctant to go into The Oulands (having been told that it's dangerous), but Bunga goes in and ends up being captured by two hyenas named Cheezi and Chungu who were sent by their leader Janja to get Bunga and have him for lunch. Luckily, Kion is able to save his friend by letting out a loud roar, which causes Chungu to drop Bunga, who climbs up to safety.

After returning to Pride Rock with Bunga, Kion sees Simba talking with Rafiki and asks what they are talking about to which Simba says that he and Kion need to talk and Rafiki tells him that the roar he did was The Roar of the Elders (which when used causes the lions of The Pride Lands past to roar too). Simba and Rafiki take Kion and Bunga to secret part of Pride Rock and tell Kion that he is to be the leader of the new Lion Guard and also say that Kion's great-uncle Scar was once leader of The Lion Guard and had The Roar of the Elders, but the power got to his head and he planned to overthrown his brother and Simba's father Mufasa as King. But when The Lion Guard refused to help him, Scar used The Roar of the Elders to destroy them. Due to using the roar for evil, Scar lost his powers. Simba then sends Kion to find members to be the bravest, fastest, strongest and keenest of sight (due to Kion being the fiercest).

Kion chooses Bunga to be the bravest, a cheetah named Fuli to be the fastest, a hippopotamus named Beshte to be the strongest and an egret named Ono to be the keenest of sight. Bunga convinces Kion to demonstrate The Roar of the Elders to Fuli, Beshte and Ono, but when he tries to do so, only a squeak comes out. Simba soon arrives and isn't pleased with whom Kion has put in The Lion Guard. Simba tells Kion that The Lion Guard has always been made up of lions and scolds Kion for treating his role of leader of The Lion Guard as a game and tells him to treat his new responsibilities seriously like Kiara is with her's.

Having some alone time, Kion feels despondent from what Simba said. Just then, the spirit of Mufasa appears and tells Kion that he is about to embark on a great journey as leader of The Lion Guard. But Kion says that he doesn't think he will let him be leader, worried he can't handle it to which Mufasa replies that Simba is worried because he loves Kion and that being leader of The Lion Guard is always easy. Kion thinks he is not ready to lead The Lion Guard or use The Roar of the Elders and says that he doesn't want to end up like Scar. Mufasa tells Kion to trust his instincts and that the roar will be there when he needs it and so will he, before disappearing.

Bunga arrives and tells Kion that Janja and his clan are attacking a gazelle herd, so they head out and see that Kiara is trapped in a stampede in the herd. Along with the rest of The Lion Guard, Kion is able to save his sister and get her safely to their parents before using The Roar of the Elders to send Janja and his clan back to The Outlands. Simba realizes that Kion was wise to have chosen whom he chose and congratulates his son and accepts the new Lion Guard.

In this series, which takes place after the film, Kion continues to lead The Lion Guard and battles against Janja and his clan, along with another antagonistic animals, such as Makuu the crocodile and his float, Reirei the jackal and her pack and Zira and her pride The Outsiders (whom Kiara met in The Lion King II: Simba's Pride).