Kingdom Hearts II featured the Pride Lands (プライド・ランド, Puraido Rando?), a savanna world based on Disney's thirty-second animated feature, The Lion King. It was originally considered for inclusion in the first Kingdom Hearts but the game's engine could not correctly handle a quadripedal animal as the player, so it was moved to Kingdom Hearts II. After the death of the previous king, Mufasa, his deceitful younger brother and killer, Scar took the throne. Since then, the Pridelands have seen a steady decline in living conditions, due to his poor rule. While in the Pridelands, Sora is transformed into a lion cub, Donald becomes a hornbill bird and Goofy takes the body of a tortoise.

The Pridelands are dominated by a large central savannah area which branches off in three directions. To the north is Pride Rock, home of the lions and the seat of the world's political power. The area southwest of the savannah is where outcasts from Pride Rock, such as the hyenas, live. The skeletons of several large elephants earns this area its nickname, the Elephant Graveyard. Southeast of the savannah are the Wastelands, an arid desert of little life. Beyond the Wastelands, however, is a lush oasis.

Sora and his friends arrive in a desolate area of the Pridelands. Traveling here, they fight off a group of Heartless and save a lioness named Nala. She explains that under the rule of the new king, Scar, the quality of living has dropped drastically. After an unfortunate encounter with Scar and Pete, Sora is forced to flee Pride Rock with Nala. An idle comment by Nala leads to her revelation that Simba, the son of the previous King Mufasa the brother that Scar murdered to become King, is still alive. Traveling to an oasis, Sora is reunited with his former comrade. When approached about the prospect of being the king of Pridelands, he is less than thrilled. That night, his father Mufasa appears to him in a vision and commands him to take his place in the Circle of Life. Emboldened, he joins Sora and returns to Pride Rock to confront Scar, who reveals that he killed Mufasa, not Simba. He and Scar duel while Sora takes care of Scar's hyena lackeys. At the peak of Pride Rock, Simba deals a finishing blow but Scar's dark heart transforms him into a Heartless. After a gruesome battle, Simba and Sora emerge victorious and Simba ascends the throne to take his father's place.

When Sora and company return, all is not well. It seems that Simba is plagued with doubt and haunted by mysterious ghosts resembling Scar. Sora encourages Simba to follow his own path, rather than trying to be his father. Rafiki, the king's advisor, gives Simba some ominous words and suggests he confront the hyenas at the Elephant Graveyard. After defeating them, Scar's ghost appears and Simba's resolve crumbles. Sora finds him at the oasis, disheartened. Through Sora's goading, Simba manages to defeat the ghost and regains his strength. Unfortunately, a large number of Scar ghosts coalesce into the powerful Groundshaker Heartless. Through the strength of their hearts, Simba and Sora defeat it, restoring peace to the Pridelands.

Simba (シンバ, Shinba?) is a lion who resides in the Pridelands. He is the son of Mufasa, a former king of the Pridelands. His father was killed during a stampede caused by Simba's uncle, Mufasa's wicked younger brother, Scar, and Simba ran away from his home, believing his father's death was his fault. At that time, he met Timon and Pumbaa and became friends with them. With Sora's and Mufasa's help, he confronted and defeated Scar who had since become king. Thus, he became the new, rightful ruler of the Pride Lands. Besides his appearance in Kingdom Hearts II, he was also in Kingdom Hearts and Kingdom Hearts: Chain of Memories as a summonable ally. In Kingdom Hearts II, Simba can perform an earthquaking-scream attack with Sora by his side.

Sora (ソラ, Sora?) has his share of concerns, but overall, he manages to keep an upbeat attitude. He seems simple-minded at times but he has a strong sense of justice. He lives for the simple pleasures of life, enjoying things like sunsets and ice cream and loves his friends more than anything else. He'll even force himself to the limit to protect them from harm. Sora has always been very open with his emotions. He was the one who was chosen by the Keyblade to battle the Heartless. It was Sora who defeated Xehanort's Heartless (who called himself Ansem), ending his plan to shroud all worlds in darkness. However, Sora continued his journey, seeking Riku and the King, who were sealed behind the door to darkness. This journey took him to Castle Oblivion, when he thought that he was reunited with a friend named Naminé, but he was actually being used by Organization XIII. During Kingdom Hearts II, he searches for and eventually finds Riku and the King, and defeats Organization XIII.

Nala (ナラ, Nara?) is a female lion and a childhood friend of Simba's. Later on, the two are reunited in the jungle after Sora revealed to her that Simba was still alive. Nala is the mother of her and Simba's unborn child.

Mufasa (ムファサ, Mufasa?) was the former leader of the Pridelands. He also was the father of Simba but was killed during a wildebeest stampede caused by his brother Scar's minions.

A ruthless lion and Mufasa's brother, Scar (スカー, Sukā?) controls a pack of hyenas who are his servants. In order to usurp the throne of the Pridelands, he killed Mufasa by causing a stampede. He also made an alliance with Pete in order to stop Simba and Sora from returning. He was defeated, but dark spectres resembling him later returned to prey on Simba's hesitance.

Shenzi, Banzai and Ed are the three most prominent hyenas who work for Scar, in the hope that they will get plenty of food while he is king of the Pridelands. They were the cause of the wildebeest stampede that killed Mufasa and were ordered to kill Simba. However, the lion cub escaped into the desert through a thorn bush before they could get him. The hyenas took it for granted that Simba would die in the desert.

Goofy (グーフィー, Gūfī?) is the captain of the Royal Knights of Disney Castle and a soldier who despises weapons, instead preferring a shield to use against his enemies. Under the king’s orders, he accompanies Donald on the quest to find the key. He is an easygoing, but clumsy knight whose endearing charm evokes smiles even in the worst of times. Although he seems not as bright as Sora or Donald, he can see things that others miss. In Kingdom Hearts 2, he is able to fuse with Sora for Sora's Valor Form, and later, along with Donald, his Master and Final Forms.

Donald Duck (ドナルドダック, Donarudo Dakku?) is the court wizard of Disney Castle and a loyal servant to King Mickey. He is a short-tempered, powerful magician on a quest to find King Mickey Mouse In Kingdom Hearts, he embarks on a journey to carry out the missing king’s orders to follow the Keyblade wielder. Donald finds a letter from the King explaining his departure. Donald Duck sets out with Goofy to find and assist the King in the battle against the Heartless. He is a feisty, impatient magician whose antics are a real highlight of Sora's story. Donald is one of Sora's two companions who go with him to every world.

This version of Donald, like the protagonist, Sora, undergoes several transformations, including an octopus style merman, an African bird with his coloring and head, and an armored virtual rendition. In the world "Halloween Town", it has been said that Donald takes the form of a mummy due to the numerous bandages he is wrapped in, but closer inspection will reveal that Donald is actually invisible in that world, and the bandages are used to show where he is. This can be proven by close inspection of his midriff (which appears black when looking from the front, but is really the player looking into the inside of the bandages around his lower body), and his right elbow, which when viewed properly will show to be invisible. In Kingdom Hearts 2, he is able to fuse with Sora for Sora's Wisdom form, and later, along with Goofy, his Master and Final Forms.

In Kingdom Hearts II, Pete (ピート, Pīto?) is one of the main villains Sora and his friends have to deal with. He was originally a Captain from the Disney Castle world, referring to Mickey as the "boat boy king", but was banished to another dimension for his evil ways. However, he is freed by Maleficent and vows to help her conquer the worlds, or as he says, "have her help me take over". 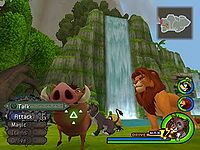 The game play is a little different from the rest of the game. It still uses the same controls, but instead of attacking the enemy's on the ground, most of the enemy's are in the air. Sora's jump is a great deal bigger then it is through the other levels. You also get an ability called 'Dash' that you can use to cover greater distances or run faster. You can use Simba for some finishing attacks, mainly, especially throughout the first visit to the world. Simba can be an especially great help for the final boss of the realm, which he can often stun the boss, so you can climb up it's back and deal your blows.