"I'm not just a princess, you know. That's only half of who I am!"
—Kiara, talking to Timon and Pumbaa

Kiara is Simba and Nala's daughter.

Nala: "Who does she remind you of?"
Simba: "What? Who?"
Nala: "She's just like you were when you were young."
—Nala and Simba, talking about their daughter

Kiara has bright orange fur as both a cub and adult. She has brownish-red eyes, similar to her father Simba and paternal grandfather, Mufasa. Her tail tuft is middle brown and her nose is a pinkish colour, somewhat like her mother Nala.

"Now, Princess Kiara, as Simba's daughter, you know better than to go off all alone."
—Pumbaa

Kiara is the daughter of Simba and Nala. She is the mate of Kovu as an adult, and appears in The Lion King II: Simba's Pride. She is voiced by Michelle Horn as a cub, Charity Sanoy as a singing cub, Neve Campbell as an adult, and Liz Callaway as a singing adult. "Kiara" is a Swahili name meaning "small dark thing".

Kiara first appears in the Presentation at the beginning of Simba's Pride. She is carried to Rafiki in her mother's mouth before being raised up for all the animals to see. After the presentation, Rafiki holds Kiara for her parents to nuzzle. Pumbaa and Timon are shocked to find out that Kiara is a girl. 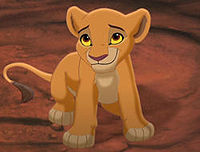 Kiara As A Cub

Kiara grows up to be a strong-headed cub. Although desperate for adventure. Simba is extremely over-protective of her and sends Timon and Pumbaa, her babysitters, to watch over her as she explores the Pride Lands. Grasping the opportunity, Kiara sneaks away from her bumbling babysitters as they start arguing about bugs, and wanders into the Outlands . Crossing a log, Kiara bumps into another lion cub. Although threatened when the other cub growls at her, Kiara determinedly stays face-to-face with him. When he asks her what she's doing, she replies, "My father told me to never turn your back on an Outsider." The other cub mocks her and calls her "Daddy's little girl". The other cub brags he can take care of himself, and walks confidently onto a stone in the middle of a swamp. Kiara follows, unaware that the stones are actually crocodiles. As the two cubs race to get away from the hungry reptiles, the Outsider cub falls into the water. As a crocodile is about to sink his sharp teeth into him, Kiara jumps on his head, shutting his jaws.

After they escape, the dark cub introduces himself as Kovu. The two cubs laugh and Kiara playfully tags him. Kovu doesn't understand what Kiara is doing. She picks up on this and responds by growling playfully at him. Kovu growls back, but as soon as he does so Simba leaps in front of Kiara. At the same time, Zira, Kovu's mother, leaps in front of her cub. The two parents roar in protection of their offspring. After a brief introduction, Simba growls to Zira, "We're finished here." Zira replies, "Oh no, Simba; we have barely begun," before laughing menacingly and slinking off with Kovu. The two small cubs whisper goodbye to each other.

On the way home, Simba stops to tell Kiara that he was disappointed with her (like when Mufasa was disappointed with him for venturing into the Elephant Graveyard). He tells her that she could have been killed, and reminds her of the "Great Circle of Life." She tirelessly finishes his sentence, and Simba tells her of the responsibilities of being a Queen. Kiara says that she doesn't want to be Queen, to which Simba replies, "that's like saying you don't want to be a lion." He tells her that they are part of each other, and sings to her about them being "One."

Years pass and Kiara grows into a slender young lioness. On her first hunt, she pleads with her father to let her do it on her own. Simba promises, but sends Timon and Pumbaa to watch her anyway. Kiara fails to hunt well, and after sending a herd of topi stampeding away from her, discovers Timon and Pumbaa. Realizing that her father broke his promise, Kiara runs away from the Pride Lands. Zira's plan begins, and she instructs her two elder cubs, Nuka and Vitani, to set the Pride Lands ablaze. Kiara, trapped in the raging flames, makes a last attempt to escape. She jumps onto a ledge and faints out of exhaustion, but not before she sees a young lion looking over her. The lion picks her up and carries her to the Pride Lands. Waking up, Kiara asks where she is; the lion replies, "You're safe in the Pride Lands." Kiara surprises the other lion with an angry outburst of abuse as to why he brought her here. The lion replies that he saved her life. Kiara attempts to walk away, but the other lion blocks her, mirroring the actions of the two cubs years before. Kiara then realizes that the young lion is Kovu.

Suddenly, Simba appears, followed by Nala and Zazu. Simba confronts Kovu, who growls back. Rafiki appears and indirectly tells Simba that Kovu saved his daughter's life. Simba questions Kovu's motives for saving her, to which Kovu replies he has left the Outsiders and is a rogue. He asks to join Simba's pride. Simba reluctantly agrees, following his father's law on repaying debts, but he allows him in on judgment. Kiara is delighted at the news. That night, Kovu offers to teach Kiara how to become a better hunter. She accepts his offer and suggests they start at dawn.

The next morning, Kovu watches Simba as he drinks at the waterhole. Kovu is ready to attack, when Kiara jumps in front of him. She excitedly jumps around and urges Kovu to start the lesson. Kovu growls, as his first attempt to kill Simba fails. While tirelessly training Kiara, Kovu shows her an example. He unintentionally pounces on Timon. who for once, he explains, is not following Kiara. He tells the lions that the birds are eating all the grubs. Kiara shows a confused Kovu how to roar and scare the birds away. Laughing, Kiara and Kovu run through the birds, making them scatter. Kovu is puzzled and asks Kiara what this training is for. She replies that this is just for fun, and Kovu doesn't understand; but soon finds out when a crash of rhinos chase the lions. Kiara, Kovu, Timon, and Pumbaa hide in a rock crevice as the rhinos run past. After the stampede, the four of them wriggle out, but as they do so Kiara and Kovu are pushed close together. Both of the lions are embarrassed, and walk back off to Pride Rock. 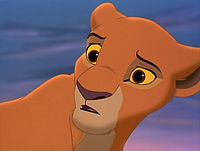 Kiara as an adult

That night, Kiara and Kovu are gazing at the stars, trying to make pictures out of the arrangement of the stars. Kiara spots a baby rabbit, and Kovu sees two lions fighting. He also admits he's never done anything like this before. Kiara is shocked and tells Kovu she used to do this all the time with her father, and that the "Great Kings of the Past" look down on them from the stars. Kovu wonders if Scar's star is up there. Troubled, he tries to leave, but Rafiki stops him and takes him and Kiara to Upendi, which is a sort of mirage, but it encourages the lions to like each other more. They sing to themselves afterwards as they make their way back to Pride Rock.

Concept Artwork of Kiara escaping the fire, with Vitani running off in the background.

Concept Artwork for Kiara and Kovu.

The next day, Kiara is surprised and pleased that her father wants to talk to Kovu, but is shocked when Simba returns injured. He explains to her that Kovu and the Outsiders ambushed him. Kiara doesn't believe Kovu would do a thing like that. Later that day, Kovu returns to the Pride Lands with a fresh scar inflicted by Zira, denying that he had anything to do with the ambush. Kiara pleads with Simba to believe him. Simba silences her and exiles Kovu. Kiara is angry at her father, and shouts at him, "You will never be Mufasa!" Upset, she escapes from Pride Rock and runs away to find Kovu.

After searching, Kiara gives up. She's overjoyed when she notices Kovu standing behind her. They laugh together and lie down next to a pool. Kovu looks at their reflection, which has merged through the ripples. He says to her, "Look, we are one." Kiara recognizes what he says and understands that she and Kovu cannot leave; otherwise the Pridelanders and the Outsiders will be divided forever.

She and Kovu race back, only to find their two prides fighting bitterly against each other. Just as Simba and Zira are about to have a showdown, Kiara and Kovu jump in front of their parents. Kiara explains to her father that "We are one", and that there is no need to fight, as the Outsiders and the Pridelanders are all one. Starting with Vitani, all of the Outsider lionesses cross over to Simba's pride. In a last attempt to fulfill Scar's plan, Zira leaps at Simba; but Kiara jumps in her way. The two lionesses tumble down into the gorge. Kiara manages to hang onto a rock, but Zira struggles to hang onto the cliff face. Kiara offers to help Zira, but Zira refuses and slips away into the churning water below. Kiara is helped back up the cliff by Simba, where she is greeted by her mother and the two prides. Kovu is relieved to see Kiara is all right, and when Simba sees Kiara and Kovu together, admits he was wrong about him, and tells him he belongs here. The two prides join, and Simba, Nala, Kiara, and Kovu ascend Pride Rock to roar out their kingdom.